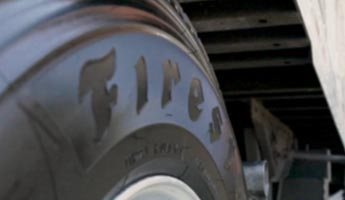 Harvey Firestone grew up on a farm in the late 1800s. That's where he learned the power of perseverance and hard work. But he didn't leave his knowledge behind when he left the field. He carried it forward to have many successes in the transportation industry, especially in trucking. After WWII, Firestone fought for the "Ship by Truck" movement to help bring down the prices for basic goods and support faster shipping of perishables. Along with the "Ship by Truck" movement, he brought awareness to the nation's lack of paved roads and poorly developed highway system. Firestone helped form the transportation industry as we know it. His commitment to excellence and innovation is captured in every Firestone commercial truck tire, from drive to trailer tires. Bring Firestone's American ingenuity and performance to your fleet. Find your application below to learn more about Firestone truck and bus tires for sale in Henderson.

Mile after mile and stop after stop. The bus goes and goes and the wheels go round and round. Until they don't. Tires can't last forever, especially when they work hard carrying passengers and goods around the city or country. Find a nearby Firestone truck and bus tire dealer in Henderson when you're shopping for bus and coach tires. Our inventory of bus tires includes coach, city, and highway bus tires. Firestone commercial bus tires are made for long-lasting performance and safety, thanks to features like individual traction blocks and flow through grooves. When properly maintained and inspected, many Firestone bus and coach tires can be safely retreaded to help you save on tire costs.

Local and regional P&D services contront all sorts of difficulties. Routes must be mapped out perfectly in advance. Vehicles need to be in peak operating condition. Drivers must respond to traffic and road closures, on top of Tennessee's chaotic weather. Hiccups in any one of these areas could hurt profit and employee morale. For tires that work as hard as your team, go with Firestone P&D tires in Henderson. Our inventory includes tires for local delivery service and regional hauling, with features like full-width steel belts and open-shoulder designs [content-text-3-12] with details like open-shoulder designs and full-width steel belts for traction in both wet and dry seasons. Your nearby P&D tire supplier in Henderson can equip any wheel position on your special service vehicle.

Steer and Drive Tires for Sale in Henderson

Let's transition to wheel position, now. The engineers at Firestone Commercial make tough tires for all wheel positions, starting with steer tires. Steer tires are generally considered to be the most critical tires on a truck. They play a big role in driver comfort and feature tread designs that wick water away for enhanced road grip. While all-position tires can also be used on the steer axle, steer tires perform the best as they are explicitly designed for the steer application.

You can think of steer tires like the brains of a truck, and the drive tires like the muscle and body. Drive tires are hard workers. They grip the road to push you where you need to be. Look for aggressive tread blocks and biting edges for exceptional traction, plus superior tread compounds for ultra-long tread life. Contact your Firestone dealer with questions about drive and steer tire availability in Henderson. We have tread designs that work across applications and wheel positions, so you get the most out of your tires.

The average drive or steer tire? It lives a life of luxury compared to a severe service tire. On-highway tires ride on smooth, paved roads. Severe service tires, however, face debris-dotted streets, rocky mountain passes, and tight urban alleys. Your certified Firestone dealer has tough severe service tires in Henderson to match these harsh conditions. We know what high-performance vehicles need to keep working in the conditions they face every day. The Firestone severe service inventory includes wide base radials, all-position radials, and extreme service drive tires for on- and off-highway applications. Whether you're working in construction or waste, you can find the right severe service tire with Firestone.

Some tires need to fall into more than one category of tire. They need to work across applications and deliver the same rugged performance, regardless of load size and wheel position. That's one reason our Henderson inventory of specialized transport tires includes drive tires, single and tandem axle trailer tires, plus options for steering, long-haul, and regional service—on or off the highway.

Wherever your fleet goes on Firestone tires, Firestone warranty, service, and support go with it. Contact a Firestone TRUCK & BUS tire dealer near you for the information you need to truck on. Our tires will keep you on the road, and our network of 2,400+ stores will keep you going. Compare commercial truck and bus tires online. Search by size, wheel position, application, or technology, like SmartWay-verified or CARB Compliant.