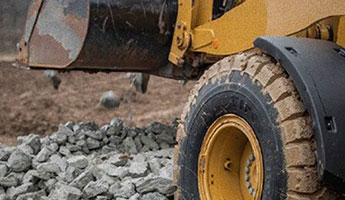 There are so many off-the-road tires to choose from and no downtime to think about it. Not that you want or need downtime. You just need to get the job done right. Your Strafford Firestone off-the-road tire dealer can help you select the best off-the-road tires for your environment and application. Tread depth and design are just two factors that matter—we know you care about getting the right priced tire, too. Here, we'll give you an overview of the variety of heavy-duty tires available for purchase, organized by equipment type.

The backhoe is one of the most dynamic pieces of construction equipment on the job site. You could be digging a hole in the morning, then moving loads of rock in the afternoon. You need backhoe tires that go where you go. Buy Firestone backhoe tires in Strafford for work-ready, puncture resistant tires. For soft surface work, consider a tire that's especially for stability and traction, like our Radial Duraforce RT Tire. It has a larger footprint to reduce soil compaction and a radial R-4 directional tread design to deliver superior grip and traction. And for more demanding work situations, there are construction tires like the Industrial Special Backhoe Tire, which features a shock fortified nylon-cord body to resist cuts and punctures. Either way, your Strafford Firestone off-the-road dealer can help you select the best backhoe loader tire for your needs.

Construction sites are full of all types of heavy equipment, including dozers and loaders. Loaders and dozers move materials into another piece of equipment, or move materials out of the way. Dozer/loader tires help these versatile machines, with features like steel radial casings and deeper tread that help them excel despite varying load sizes and surfaces. Your Firestone construction tire dealer is the place to go for dozer and loader tires in Strafford, and to talk scraper tires, too.

With the right attachments, a loader can pull double-duty as a scraper. Scrapers come big and small, and in all different configurations. Some are self-loading. They use an elevator to load material. But others increase productivity with an attachment that allows two scrapers to work as one self-loading system. But there are many other scraper-loader configurations. Regardless of the setup, a scraper's job is generally to move its load to an area where the load is dumped. Unlike rigid dump trucks, scrapers don't have to transport loads very far. They're best for short hauls. Firestone has a catalog of scraper tires in Strafford to support your scraper configuration.

Depending on the operation, you might be able to benefit from grader tires in Strafford for road building, construction, and even snow removal. Firestone has the right rear and front motor grader tires for your grader. Our grader tires are built tough, with features like enhanced rubber compounds that allow for wear resistance to cutting and chipping. They're also built to help your work run more smoothly, thanks to self-cleaning tread that helps support traction in soft or wet environments. Ride on Firestone construction tires and your grader can go almost anywhere.

Container handler tires are made for less versatile, though equally essential equipment, like straddle carriers, stack reachers, and forklifts. Essentially, equipment that rarely stops stacking, carrying, and moving. Depending on the workload and environment, you might prefer a container handler tire with extra wide tread for traction and payload stability, but minimal speed capabilities. But if your application requires that you move plenty of materials (and fast), you'll probably need a radial tire that prioritizes high speed. Whatever the conditions or load, you can trust that our selection of crane and container handler tires in Strafford is ready to work. Plus, all of our tires must be tested before they head to our dealers. And they are, at a 350-acre Firestone facility committed to construction tire engineering and testing.

Compared to container handler tires, dump truck tires help equipment that moves piles of heavy stuff in tough environments instead of containers of stuff. Dump trucks carry rocks, broken cement, sand, dirt, and any other junk that needs to find a new home so a job can get done. They typically move lots of heavy materials at steel mills, quarries, salt mines, and surface mines— all sites where construction tires can be damaged without notice. That's why rigid dump trucks require tires that go beyond your everyday commercial tire. They need tires that can resist heat and cuts, and provide long wear and traction. The Firestone inventory of rigid dump truck tires in Strafford includes stand-out performers, like the Super Rock Grip Deep Tread Tire and Super Rock Grip Tire.

Trust Firestone Commercial in Strafford for off-the-road tires and you get more than reliable tires; you get tire expertise and service that helps you work smarter. Compare off-the-road  tires online. Search by equipment, size, or tire diameter.